Video Overview of Sam & Me

You can help fund our project!

Posted by Brian Kirk at 9:43 AM No comments: Links to this post

“Uncle Sam” Armstrong (Craig Henne) is getting out of court ordered rehab – for the 8th time.  Sam was a Vietnam War hero who came to embody the populist patriotism of the late 80s and early 90s.  Known as “the Hulk Hogan of American politics,” his endorsements swayed presidential elections and three of his books became action movies, which he starred in.


Uncle Sam lost it all because of his addictions to gambling, alcohol, women, and drugs.  His release from rehab legally requires a halfway house, but none can take him due to his high profile.   A magistrate allows his nephew Kevin Armstrong (Brian Kirk) to take him in.  Kevin, 39, has idolized Sam for a lifetime, and is eager to give back to the uncle who helped shape him through his books, movies, and love.


A hard-working and driven man, Kevin is a struggling real estate agent.  He’s grown skeptical of the federal government, viewing it as the primary obstacle to success, echoing sentiments from Sam’s books.


Kevin grows disillusioned when he sees that Sam has become utterly dependent on him, to the point of emotional and financial exhaustion.  Sam spends thousands of Kevin’s dollars without asking, and when confronted, questions Kevin’s loyalty as a nephew.


Once Kevin works up the courage to cut Sam off financially, his uncle signs up for a Bank of Asia “Vice” card, using Kevin’s name.  Sam begins buying items with the card, reselling them for cash, in order to feed his drug habit and keep his gambling debt collector at bay.


Kevin’s best friend and boss, real estate broker Jake Joseph (Declan Joyce), has a secret family in Albania that needs his financial support.  Working behind the scenes with Uncle Sam, Jake recruits former “dancer” Heather (Theresa Carissimi) to pose as a client and love interest, distracting Kevin from the damage being done to his bank accounts.


The office manager at Kevin’s brokerage (Lulu Braha) warned Kevin about Sam from the beginning, to no avail.  Kevin’s distraction is compounded when he begins to fall in love with the office manager’s daughter, Lauren (Madylin Sweeten), whose sass and substance prove irresistible to him.


Political issues explored through the film include:


Not only does Uncle Sam recklessly spend Kevin’s money, he pawns Kevin’s prized knick knack which was given to him by his uncle decades before, symbolizing the intentional crushing of the American spirit on the part of heartless bureaucrats.

Sam confiscates Kevin’s soda, salt, and gun, in order to protect Kevin from himself.  But Sam drinks the soda and takes the gun to a firing range.  After all, “Okay for me, but not for thee.”


Because he always preached personal responsibility, Kevin is shocked by Sam’s suggestion that he apply for Section 8 housing and food stamps.  “Work the system, or the system will work you,” has become Sam’s new guiding principle.


Sam gains access to Kevin’s journal, while Kevin sets up cameras and keylogging software to spy on Sam.


Sam dismisses the U.S. military and the struggles of the Vietnamese people, informing Kevin that his military heroics only served to help him profit from books and films.


When spending your own money isn’t enough, simply borrow from the Asians, then default or defraud in order to continue.


Sam has been helping a Mexican immigrant named Hector, with Kevin’s money.  When Kevin objects, Sam accuses him of racism and heartlessness.


Sam obtains a loan for Hector by lying to a banker who relaxes his standards, putting Kevin’s financial future on the line.


Torn between family loyalty and self-preservation, Kevin takes action.  He evicts Sam, leading to a bloody personal revolution.  Kevin’s new life begins, after he ends the life of his former hero.  A hero who had grown too big to fail.
Posted by Brian Kirk at 8:59 PM No comments: 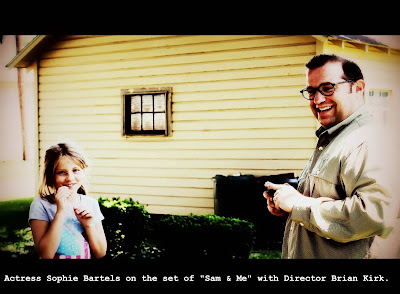 Q: What inspired the idea for Sam & Me?

A: Craig Henne is a friend of mine with great acting chops who actually looks like Uncle Sam from the old posters.  We've collaborated a lot in the past.  I was thinking, wouldn't it be fun if there was a sitcom about some good-intentioned larger than life merry Uncle Sam-like thug who kind of takes over his nephew's life?  The more we brainstormed scenarios, the more serious the issues got with the NSA, ObamaCare, etc., the longer it got, and it certainly has more of a dark comedy tone than a sitcom feel.

Q: This is your first feature film.  What convinced you that you could make it?

A: The sketch comedy I've produced, the TV pilot, the corporate videos I've directed, the documentaries and political ads I've produced all gave me the blind confidence I needed to believe I could execute a feature film. Technically, I'm not ready.  But technically I wasn't ready to get married or be a dad, either.  If you wait until you're ready to do something, you'll never do it.

Q: Why this project?

A: The expression unction of the spirit comes to mind.  Sometime, I get ideas that I just HAVE to do, as if I have no choice.  It's like something outside myself.  I get this with comedy sketches.  The last time it happened in comedy was a fake infomercial for Ray Romano narrating an audio bible. Sam & Me is like that, but on a much larger scale with more discipline and more focus.  But largely it's the same creative expectation.  I'm going to do this because it has to be done.  Whether it's a commercial success or not isn't up to me.  In fact, my mom hated my Ray Romano bible sketch.  But I didn't make it for her.  I made it because of an unction.

A: Everything we're doing on this project is based on the Ed Burns model of bare bones, calling in favors, etc.  Every time I get caught up in the technicalities, I watch Nice Guy Johnny to remind myself that a good script and the right actors are 95% of the battle.  Does anyone really notice or care that there's some camera shake when Johnny and his uncle leave the Hamptons?

Q: I noticed, and it drives me crazy.

While the script is complete, the actors involved in the project have a gift for improvisation.

"Once filming starts in mid-August, I'm absolutely certain that there will be some wonderfully pleasant surprises.  Craig Henne is a major talent who blabs brilliantly on the radio for hours each day.  The final production will follow the script, but precisely how the themes are delivered is subject to creative interpretations - changes I'm looking forward to experiencing and embracing," said Kirk.

A word about Cussin'

Initially, Sam & Me was written based on the way writer / director Brian Kirk often speaks with his own friends.  Yes, they can be crude.  They can drop F-bombs.  But then a lesson Kirk learned early on in stand-up came roaring back.

"I was reminded that it's much harder to write clean than it is to write blue.  So I took on that challenge, and went through a total re-write that still delivers an authentic sounding message about patriotism, struggle, and faith, while ensuring that this is something I can show my own kids, my own parents, or a left-wing film buff, without being embarrassed," continues Kirk.

"Ultimately, this film's core audience is likely to be conservative and religious.  Why alienate a huge portion of our viewers with unnecessary crudeness?"

Though most major roles are cast, auditions will take place August 9-10 in Palm Beach County, and filming will commence August 12-30.  The month of September will be spent in post-production, with a targeted release date of mid-October.

For more information on Sam & Me, contact Brian at brianfkirk@gmail.com.

Posted by Brian Kirk at 8:26 PM No comments:

We are looking for the following locations within Palm Beach County.  Any business or restaurant that helps out will get mentioned in the credits.  Filming will be minimally invasive, and could blend in with normal day to day activities.

Posted by Brian Kirk at 6:46 PM No comments:

"Uncle Sam" was a great guy who did great things.  He wrote best-selling books about his love for America and his exploits in Vietnam, even children's coloring books.  He starred in three Hollywood blockbusters based on his books and graced the cover of ThisWeek magazine in 1989. Sam was the 'Hulk Hogan' of the populist literary and action movie world.  His endorsements swayed presidential elections (he refused to run himself).  But something happened.  Sam got lazy.  He got indulgent.  He got addicted.  But everything's about to change when his nephew Kevin takes him in after a final stint in rehab. 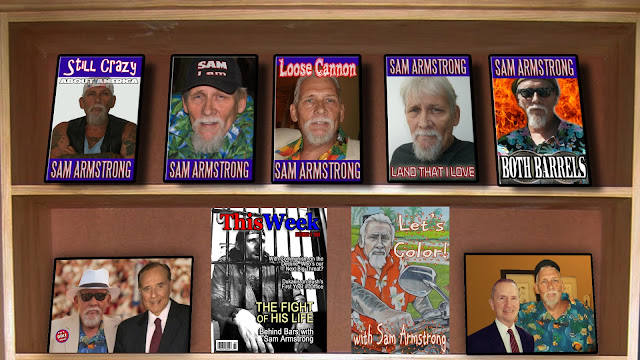 Posted by Brian Kirk at 1:32 PM No comments: